﻿I am an applied mathematician specialising in the modelling, analysis and application of waves found in a wide range of application areas in physics and engineering. I am a keen supporter of interdisciplinary research and knowledge exchange.. i.e. ensuring that mathematical scientists connect with others inside and outside of academia to overcome societal chellenges and to further intellectual understanding./

Since October 2021 I have held the position of Professor of Applied Mathematics in the Department of Applied Mathematics and Theoretical Physics (DAMTP) at the University of Cambridge. Cambridge has an illustrious history in applied mathematics and theoretical physics, stretching from Isaac Newton through James Clerk Maxwell, Charles Babbage, George Stokes, Lord Rayleigh, JJ Thomson, Paul Dirac, to James Lighthill and Stephen Hawking. DAMTP was first established as a Department of the University of Cambridge in 1959, by George Batchelor, with succeeding Heads of Departments being Keith Moffatt (1983-1991), David Crighton (1991-2000), Tim Pedley (2000-2005), Peter Haynes (2005-2015), Nigel Peake (2015-2020) and Colm-Cille Caulfield (2020-present).

In October 2021 I commenced a Royal Society Industry Fellowship, which will allow me to work with an industrial partner on a variety of topics, including new mathematical aproaches to modelling acoustic and elastic metamaterials. I am also fortunate in having a number of honorary and visiting positions to aid research collabrations.These include Honorary Chairs at the Universities of Edinburgh and Aberystwyth and a Visiting Professorship at Keele University.

Prior to my present chair in DAMTP, between 2016 and 2021 I held the posts of NM Rothschild & Sons Professor of Mathematical Sciences and Director of the Isaac Newton Institute for the Mathematical Sciences (INI) at the University of Cambridge. INI is one of the principal centres for Mathematical Sciences in the world; its main role is to organise a wide range of long-term programmes in all areas of mathematics which bring together top international researchers. However, it performs many other roles for the benefits of the community, such as providing a venue for early career researchers (ECRs) to meet leaders in their field, acting as a base for interdisciplinary studies across the whole of the sciences, and offering a programme of mathematics communication. It also engages actively in knowledge exchange activities, which are organised through the Newton Gateway to Mathematics. If you are interested in the activities at INI, and particularly in finding out what is involved in running an INI programme, please check out the website and/or send the present Director, Ulrike Tillmann FRS, an email.

Since October 2016 I have been a Fellow of Corpus Christie College, Cambridge. It has a wonderful history and many treasures, including the Parker Library.

Between 1998-2016 I held the Beyer Chair of Applied Mathematics in the School of Mathematics, University of Manchester, one of the UK’s principal established posts in mathematics. I still hold a Visiting Researcher position at Manchester, and with Will Parnell I co-led the Mathematics of Waves and Materials (MWM) Group at Manchester, which has concerned itself over the last dozen or more years with many aspects of wave propagation, especially through materials containing complex microstructure (including biological tissues), with the aim of obtaining ‘effective’ or averaged properties. At the heart of the latter work is the mathematical approach called homogenization which, in one form or another, is central to much of modern applied mathematics, allowing the removal of extraneous detail and development of models focusing on critical phenomenological detail.

I play an active role within the international mathematics community, having served on over thirty national and international working parties, panels and committees over the last decade. In particular, pver the last decade I have been particualrly committed to promoting and nurturing knowledge exchange in the mathematical sciences, and more recently driving a proposal to create a new National Academy for the Mathematical Sciences. I led a working group which prodcuced a detailed Green Paper on the latter project in December 2021, and alongside it coordinated the publication of a consultation paper for creating a new UK Connected Centres Network for knowledge exchange across the mathematical sciences..

I was President of the Institute of Mathematics and its Application in 2008-9, Member of sub-panel UoA23 (Applied Mathematics) for the 2008 Research Assessment Exercise and Deputy Chair for sub-panel B10 (Mathematics) in the 2014 Research Excellence Framework, and Chair of EPSRC’s Mathematical Sciences Strategic Advisory Team (2014-15). I also held a Royal Society Wolfson Research Merit Award (2013-16).

Over the years I have become increasingly enthusiastic about public engagement activities. I regularly offer mathematics talks of interest to school students and the general public, and with Chris Howls (Southampton University) I ran annual ‘Meet the Mathematicians’ events for sixth form students. Chris Budd (Bath University) and I organised an EPSRC funded conference in 2010 on ‘How to Talk Maths in Public’, which now continues annually as a training conference for aspiring maths communicators called Talking Maths in Public. and we ran the first UK ‘Festival of Mathematics and its Applications’ in 2014. The latter was part of the Institute of Mathematics and its Applications’ 50th anniversary programme, and was an adventurous two-day meeting bringing together academics, mathematicians from outside academe (school teachers, industrialists, mathematicians in the financial sector etc.), and over 1100 school students.

Between 2014-2016 I took on the role of Scientific Director of the International Centre for Mathematical Sciences (ICMS), Edinburgh. My immediate successor as Scientific Director of ICMS was Professor Paul Glendinning, University of Manchester and the incumbent is Minhyong Kim. The principal job of ICMS is to organise a programme of week-long workshops, which bring the top overseas researchers together with UK practitioners. Added to this are other initiatives, such as the Research in Groups scheme, and activities to foster knowledge transfer and mathematics communication. ICMS works closely with INI, its bigger sister, to provide the whole of the UK mathematics community with comprehensive 'research infrastructure'. ICMS moved into a beautiful new building in summer of 2018, with stunning view of Arthur's seat and the Crags. 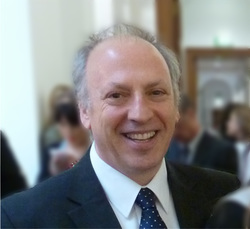